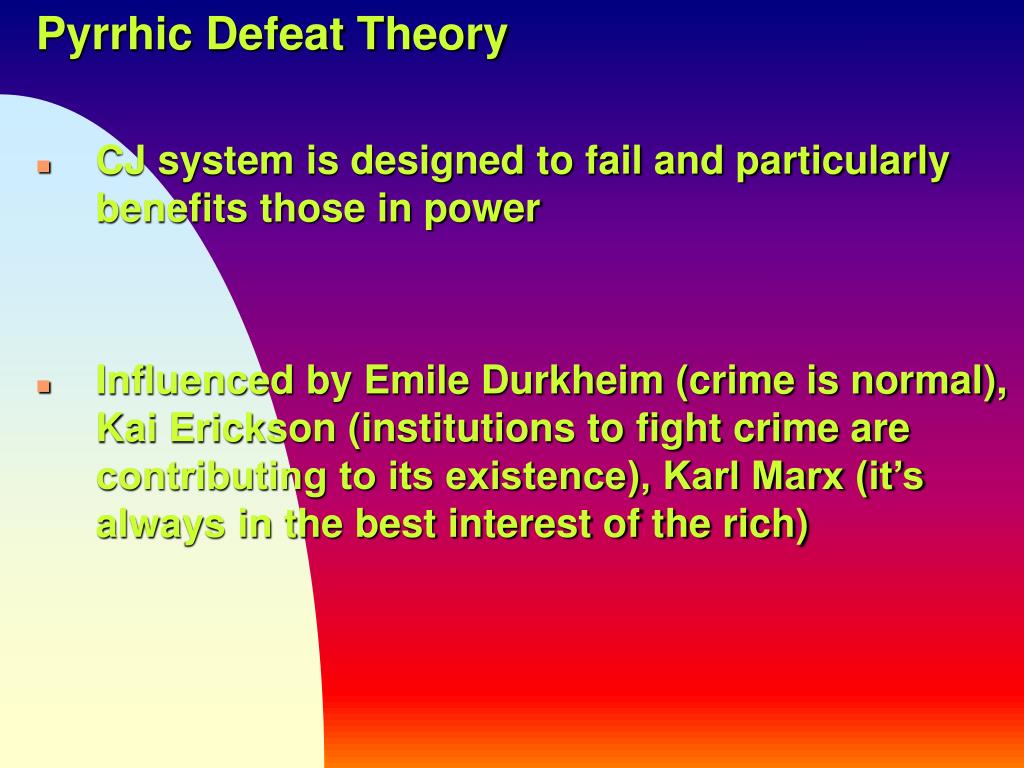 What is Pyrrhic Victory - Explained in 2 min

Retrieved Our myopic fixation on federal judicial review blinds us to the legal problems that bedevil every other court. State courts decide far more cases than federal courts. And common law subject matters such as tort, property, and contract pervade state court decisions, even when legislators have codified many common law standards. The fight extends far beyond federal textualism. Where does that leave us? Originalism is largely faithful to the classical legal tradition.

Legal realism is not. Our jurisprudence cannot endure half true and half false. It will either become wholly one or wholly the other. Conservatives should choose the classical tradition. We live in the world that Justice Scalia made, and we are largely better off for it. The irony of our times, though, is that the situation he faced is now reversed. He worried that lawyers were obsessed with common law reasoning but lacked a theory of reading legal texts. The ascendant conservative legal movement has a coherent theory of interpretation; it lacks everything else. We cannot defeat legal realism unless we ally originalism with our entire conservative tradition. The moral and traditionalist reasoning of the common law method must be revived and validated.

First , we need not abandon the conservative hermeneutic. Some theory of interpretation is necessary. When faced with a validly enacted text, courts defer to the legislature as the proper organ for making policy. This requires a theory of how to properly understand textual legal commands. Discerning what the words originally meant enables judges to perform that task with fidelity. But interpretation is not the whole of adjudication.

Courts must not fall into the trap of thinking that a system containing many statutes must be a system containing only statutes. Second , we must revive the traditional understanding of common law reasoning that separates our view from that of legal realism. A common law court does not simply make up law. We should instead see that they establish law from the general legal rules already made available through reason and tradition. Courts establish law by giving it a concrete shape or definitive application.

This is true even of judicial decisions applying written law. Establishing doctrine and determining applications does not make the judicial decision itself a source of law. A simple model of common law reasoning is this: Human reason grasps moral imperatives that provide primary rules of human conduct. These moral rules—requiring us to refrain from harming others or to keep our promises—can be understood as binding legal rules, even though they are unwritten. From a positivist perspective, this requires only a rule of recognition designating them as such.

From a natural law perspective, all legal rules are derivative of the moral force of these primary rules. Even the obligation to obey positive law flows from them. But these rules are relatively indeterminate; people need more specific guidance. The judge, in our system, discerns these moral principles and then gives them a definite shape by reference to custom, which informs the reasonable expectations of the parties. Over time, the case law itself forms customs that courts might reasonably follow. In a hierarchical system, higher courts bind lower courts in their determinations of how custom concretizes the requirements of morality.

Reason and tradition thus ground the common law in pre-existing legal obligations. The choices that judges make, while not fully mechanical, are meaningfully constrained by their limited role as adjudicators of concrete disputes. As courts develop standards of evidence, burdens of proof, procedures for litigation, and necessary elements of claims, they establish more clearly what a court ought to require before finding a violation of those pre-existing moral obligations.

Just as a well-reasoned textualist opinion clarifies the application of a statute and provides a doctrinal test for its application, a common law opinion elucidates the requirements of morality and provides administrable rules for deciding future cases. At common law, statutes serve to stabilize and publicize the law, providing greater predictability and oversight of the courts. They form part of the background expectations of litigants. Likewise, civil law systems have codes as the basis of adjudications. But unwritten principles nonetheless fill in the inevitable gaps of the text and provide legal answers to disputed questions.

The two forms of reasoning always work in tandem. When we focus on state courts and common law cases, we can conclude that originalism is insufficient for a full conservative theory of law. That same recognition should drive our strategy. To revive moral jurisprudence, conservatives should look to the states. The states-first strategy has been successfully deployed by other legal reform movements. By reshaping the state courts, reformers have laid the groundwork for nationwide victories, including Brown v.

This approach offers a path around the high-stakes logjam of federal constitutional debate. First , state courts should adopt rigorous interpretive theories for written law. Courts cannot do without a theory of interpretation. And originalism in some form is likely applicable to most state constitutions. It is a bulwark against relativistic evolving-norms jurisprudence and a powerful schoolmaster for disciplining our textual reasoning. We should continue to embrace it as one part of our jurisprudential program.

Second , state courts should invoke the natural law when establishing their common law. The current approach elevates two aspects of moral reasoning—efficiency and fairness—and excludes all other criteria for legal judgment. Overt policymaking is a false substitute for the robust classical approach. States should reestablish the natural law ground of the common law and let its full logic shape judicial decisions. Anything less is a tacit admission that legal realism has triumphed. Third , when the states have accepted the natural law as an integral part of American legal reasoning, the federal courts should follow their model. We must rethink the assumption that federal judges differ in kind from state judges. Common law reasoning, rightly understood, is the anchor of our legal system.

Its practical effect may differ because of the limited subject-matter jurisdiction of federal courts, but it ought to be common ground for all judges. We should cast aside the anachronistic assertion that the Founders would strip judges of their ability to reason from morality on account of their tenure protections. Instead, federal judges should be equipped by their experience to handle the intricacies of legal reasoning. They are freed from our election precisely because legal reasoning involves the delicate application of complex but objective truths, not the raw channeling of democratic preference. Conservatives can revel in our successes, rest on our laurels, and resign ourselves to retaining what little progress we have made in the federal courts, or we can press on to the states.

We can force back the liberal jurisprudence that has undermined our traditions and led American law astray. We can—we should —begin a great undoing of legal realism. But the path that leads to plaudits and the path that leads to justice have diverged. Our appointed path begins in state courts, not ivory towers. It is not prestigious. It is not immediately gratifying. But it is worthwhile. Originalist thought has not just been on a steady legal trajectory over the last 20 years. There is also an important and overlooked political story to tell. Is it an indictment of originalism that most originalists in the academy are white males?